What do YOUR eyes say about your health?

They say the eyes are the window to the soul. But they also offer a vital look at to the body’s overall health.

From diabetes to liver disease, serious and even life-threatening conditions can be detected in the way your eyes look, feel and function.

Speaking to FEMAIL, opticians and eye surgeons from across the UK have outlined the subtle changes and symptoms you could be missing that could signal a more significant issue.

Shafiq Rehman, a consultant ophthalmic surgeon at eye hospital group Optegra Eye Health Care, explained: ‘Our bodies are very clever at giving us indications that something is wrong.

‘From an increased heartbeat when stressed, to muscle twinges when putting too much strain on our backs.

‘And our eyes are no different. There are a number of signs that something may be amiss – but we need to recognise them.’

Here, the experts outline 12 issues that can be seen in your eyes. If you think you might have any of them, it is best to seek professional attention as soon as possible.

Opticians and eye surgeons from across the UK have outlined the subtle changes and symptoms you could be missing that could signal a more significant issue. Stock image

Specsavers’ clinical services director Giles Edmonds said: ‘There are cases where opticians have spotted symptoms of life-threatening conditions such as brain tumours.

During an eye test, your optician might spot signs of high blood pressure, through observing the eye’s blood vessels to see if they have narrowed or started leaking.

‘In some cases the retina also becomes swollen and the blood vessels can leak.’

A swollen optic nerve or shadow in the back of the eye can be indicative of a brain tumour or other serious conditions which is why keeping up regular eye tests every two years is so important.

‘Specsavers stores also offer Ocular Coherence Tomography (OCT) scans. OCT technology uses light to take more than 1,000 images of the back of the eye, including the retina optic nerve.

‘A layered image is then created to allow the optometrist to view the deeper structures of the eye in more detail than ever before, meaning sight-threatening conditions such as diabetic retinopathy, macular degeneration and glaucoma and even brain tumours, can be picked up earlier.

Mr Shafiq Rehman (www.optegra.com), said: ‘Diabetes is a chronic metabolic disorder characterised by insufficient insulin production or insensitivity to insulin, which leads to too much sugar (glucose) in the blood.

‘Regulating blood glucose levels is extremely important. Untreated diabetes can result in damage to blood vessels, nerves and organs such as the kidney and the eye.

‘The retina is situated at the back of the eye and responsible for detecting light and transmitting this signal to the brain, resulting in a visual image.

‘These vessels can be damaged by the high blood sugar levels often seen in non-treated diabetes or diabetes that is not completely controlled. This is known as diabetic retinopathy, which can take several forms.’

Yellow tinge to the whites of the eyes 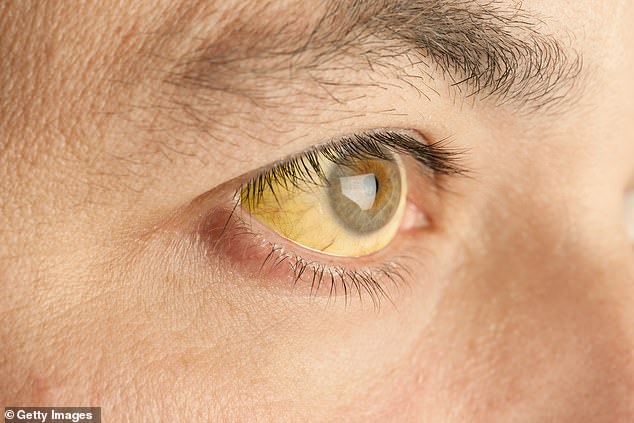 ‘The eyes turning yellow is typically a sign of jaundice,’ explained Dr Elizabeth Hawkes. ‘It can be a sign of liver problems such as liver disease’. Pictured, the eyes of someone with jaundice

‘This is a condition that occurs when the oxygen-carrying components in the blood break down into bilirubin and your body doesn’t clear it.

‘The whites of your eyes, or sclera, turn yellow when your body has too much bilirubin, a yellow substance that forms when red blood cells break down. It can be a sign of liver problems such as liver disease.’

Other symptoms of liver disease may include feeling very tired and weak all the time; a loss of appetite – which may lead to weight loss; and loss of sex drive (libido).

Along with blurry vision, pain in eye with nausea or a sudden loss of vision, rainbow circles or bright lights could be the first signs of glaucoma, explained Mr Rehman.

As well as causing inflammation of the joints, some autoimmune diseases, such as rheumatoid arthritis, can also cause inflammation in the eyes.

Mr Edmonds said: ‘This inflammation usually leads to dry eye but occasionally it can cause more serious conditions like inflammation of the iris.’

‘Glaucoma appears in different forms and is a group of eye conditions in which the optic nerve becomes damaged, usually due to a rise in intra-ocular pressure (IOP).

‘The most common form of glaucoma is ‘open angle glaucoma’ and is known as the ‘silent thief of sight’ as there are no symptoms or early signs – and so it is crucial to have an eye test every one-two years if you have a family history of glaucoma. From age 40 you are eligible to have free NHS annual eye tests.

‘Symptoms to look out for in ‘angle-closure glaucoma’ include eye and head pain, the appearance of rainbow colour circles in bright lights, and blurry vision. The pain can cause nausea and vomiting and can even lead to sudden sight loss.’

Pain or pressure in the eye

Mr Edmonds said: ‘During an eye examination, we can spot changes in eye health that indicate a more serious issue, such as a stroke. Symptoms to look out for include:

A grey or white ring around the cornea 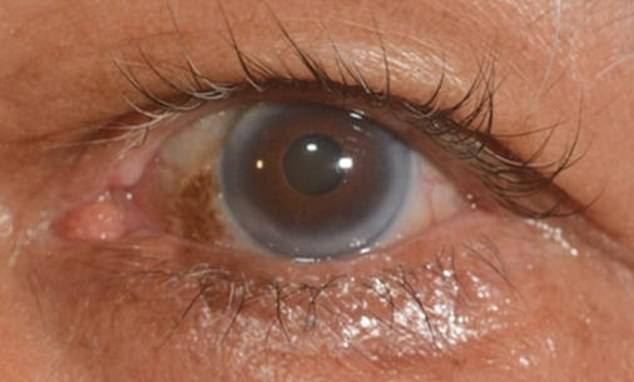 A grey or white ring around the cornea is called Arcus senilis. When found in older adults it is commonly a sign of aging in younger people it can be a sign of raised cholesterol

Dr Hawkes said: ‘A grey or white ring around the cornea is called Arcus senilis. It’s common in older adults and is caused by fat deposits in the edge of the cornea.

‘When found in older adults it is commonly a sign of aging in younger people it can be a sign of raised cholesterol.

‘This finding would warrant a vascular risk factor screen so it’s always important to have it checked by an expert.’

Dr Hawkes said: ‘This could be an indication that you have Dry Eye Disease, a common condition that occurs when your tears aren’t able to provide adequate lubrication for your eyes.

‘A healthy lifestyle can significantly reduce the risk of eye problems. Fish is good because it’s rich in omega-3 fatty acids. Some studies have found that fish oil can help the symptoms of dry eye disease and blepharitis, including dry eye caused by spending a lot of time on a screen.

‘Nuts are also rich in omega-3 fatty acids, and contain lots of vitamin E which can protect the eye from age-related damage. Citrus fruits are rich in Vitamin C which is an antioxidant that’s recommended to fight age-related eye damage too.

‘And carrots are rich in Vitamin A and beta carotene. Vitamin A plays an essential role in vision. Lutein and Zeanthin are important for Macular health and should be added to your diet if there is a family history of age related macular degeneration. Large studies confirmed that following a Mediterranean diet is good for eye health.’

Could be: Age-related Macular Degeneration

As we get older, the macula (the central part of the retina responsible for detailed vision) can begin to break down, causing blurred vision.

The earliest sign of macular degeneration is often the appearance of small yellow deposits called drusen, which form under the retina.

These are accumulated waste products which, as they get larger, stop the flow of nutrients to the retina and cause the layer of supporting cells beneath it to become very thin.

When cells in this layer die, the overlying macula degenerates and loses its visual function. Age-related macular degeneration (AMD) is a leading cause of visual impairment in the UK.

Misting of the vision 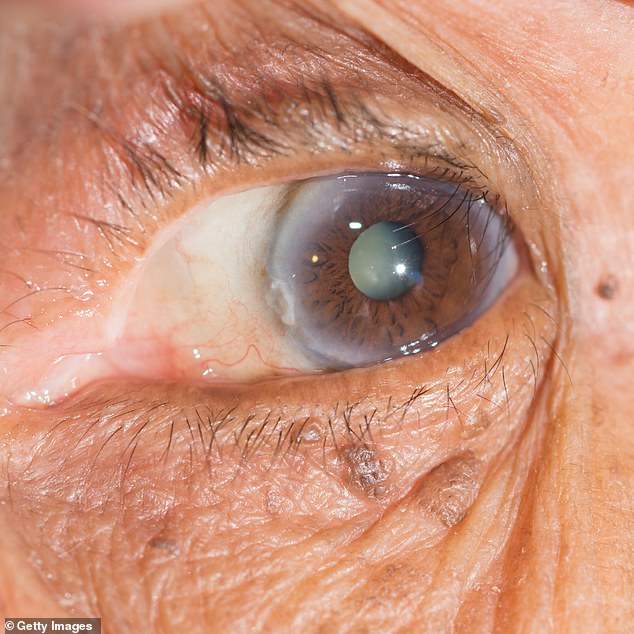 Ian Charles White, a specialist optometrist, said: ‘Cataracts are typically an ageing change of the eye, in which the clear lens inside the eye becomes cloudy over time’, pictured

Ian Charles White, a specialist optometrist based in Cheshire, said: ‘Cataracts are typically an ageing change of the eye, in which the clear lens inside the eye becomes cloudy over time.

‘Cataracts are typically noticed by patients via a gradual and painless misting of the vision over a number of months and years, even when wearing their glasses.

‘They usually occur in both eyes, although can affect one eye more than the other in the early stages.

‘Drivers can often notice the onset of cataracts when they start to struggle with the dazzle of oncoming headlights at night – a sure sign it is time to get an eye test.

‘The gradual clouding (opacification) of the lens in the eye is not reversible and so will not improve on its own or via any health supplement or prescribed medication.

‘The only current treatment for cataracts is to have the cloudy lens removed via microsurgery and have a new clear plastic lens fitted in its place. This is a very routine procedure these days, often taking only 20 minutes to complete and does not require a hospital stay.

‘Cataract surgery is only performed on one eye at a time for safety reasons, but if you do need both eyes correcting, this can be achieved once the first has fully recovered after around 6 weeks.’

Wrinkled and sagging skin around the eyes

Dr Hawkes said: ‘As you age, your eyelid skin loses its elasticity and stretches, the muscles directly underneath weaken (orbicularis oculi). The septum, an important and unique structure to the eyelids weakens. The eyeball is cushioned in fat held in place by the septum.

‘As the septum weakens either over time or due to a genetic predisposition, the orbital fat prolapses above and below your eyelids, causing sagging and the appearance of eye bags under your eyes.

‘Besides making you look older, severely sagging skin around the upper eyelids can reduce your side vision (peripheral vision), especially the upper and outer parts of your field of vision.

‘However, it could also be an indication of stress which can also impact this delicate skin around the eye area.

‘I have already seen a significant increase in patients coming to me for blepharoplasty surgery since the start of the pandemic.’The stress of the pandemic coupled with us seeing a permanent reflection of ourselves on Zoom calls has absolutely been a catalyst. American statistics in 2019 saw an increase in the number of blepharoplasty surgeries by 2 per cent I predict this to rise in 2020-2021 significantly.’