Receive an email when new articles are posted on

Please provide your email address to receive an email when new articles are posted on .
We were unable to process your request. Please try again later. If you continue to have this issue please contact [email protected].

A 55-year-old white man presented with the complaint of sudden onset central scotoma in both eyes for 1 month. The patient reported the condition slightly improved from the initial onset.

His medical history was positive for syphilis, HIV, hyperlipidemia and anxiety. The patient reported that he was a former smoker, social drinker and used recreational drugs. His ocular history was unremarkable.

Confrontation visual fields, IOP and extraocular motilities were within normal limits. Pupils were equal, round and reactive to light and accommodation. Vision was 20/60 OD (pinhole: 20/50) and 20/50+2 OS (pinhole: 20/40). Anterior segment findings were unremarkable. 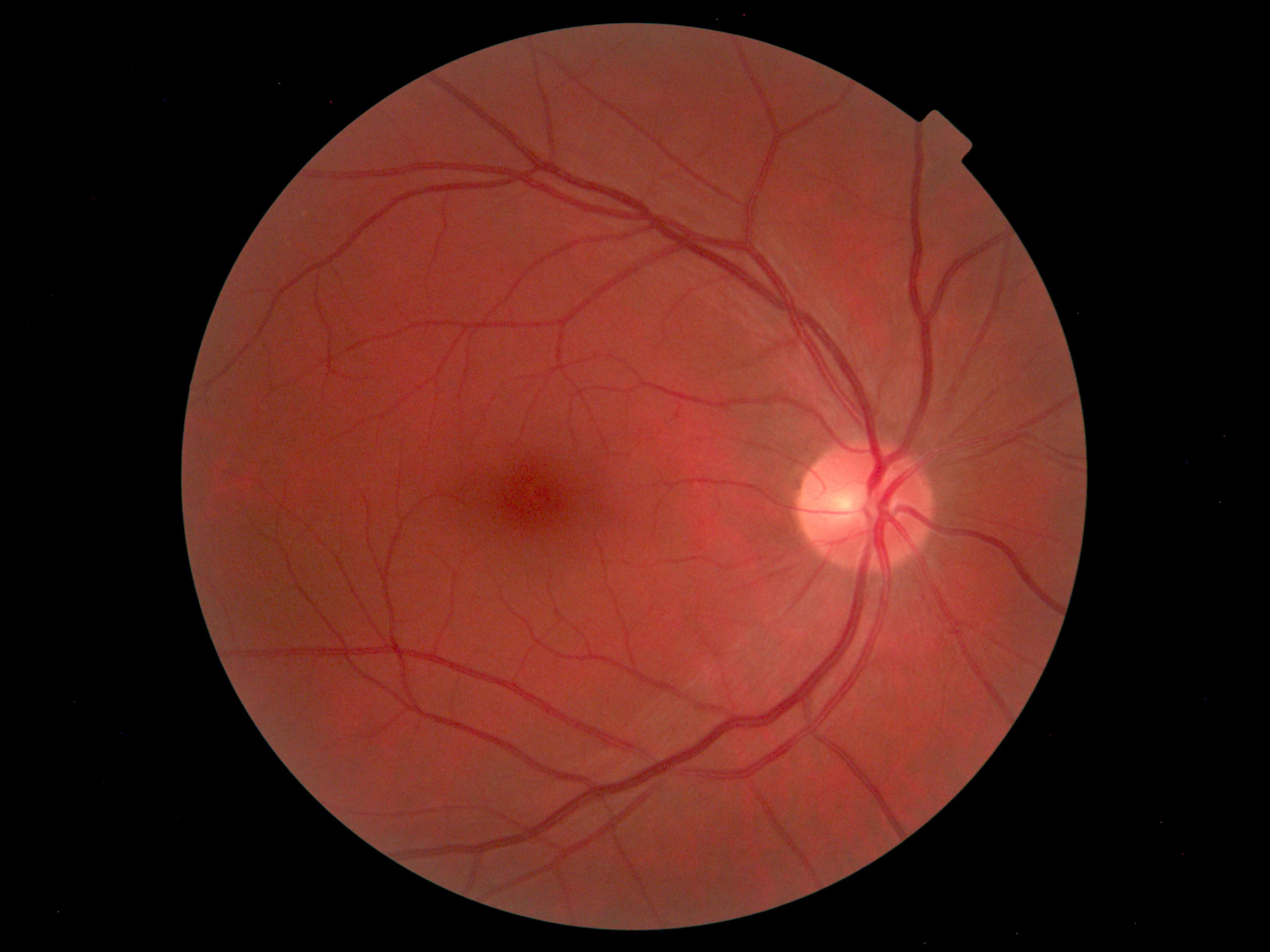 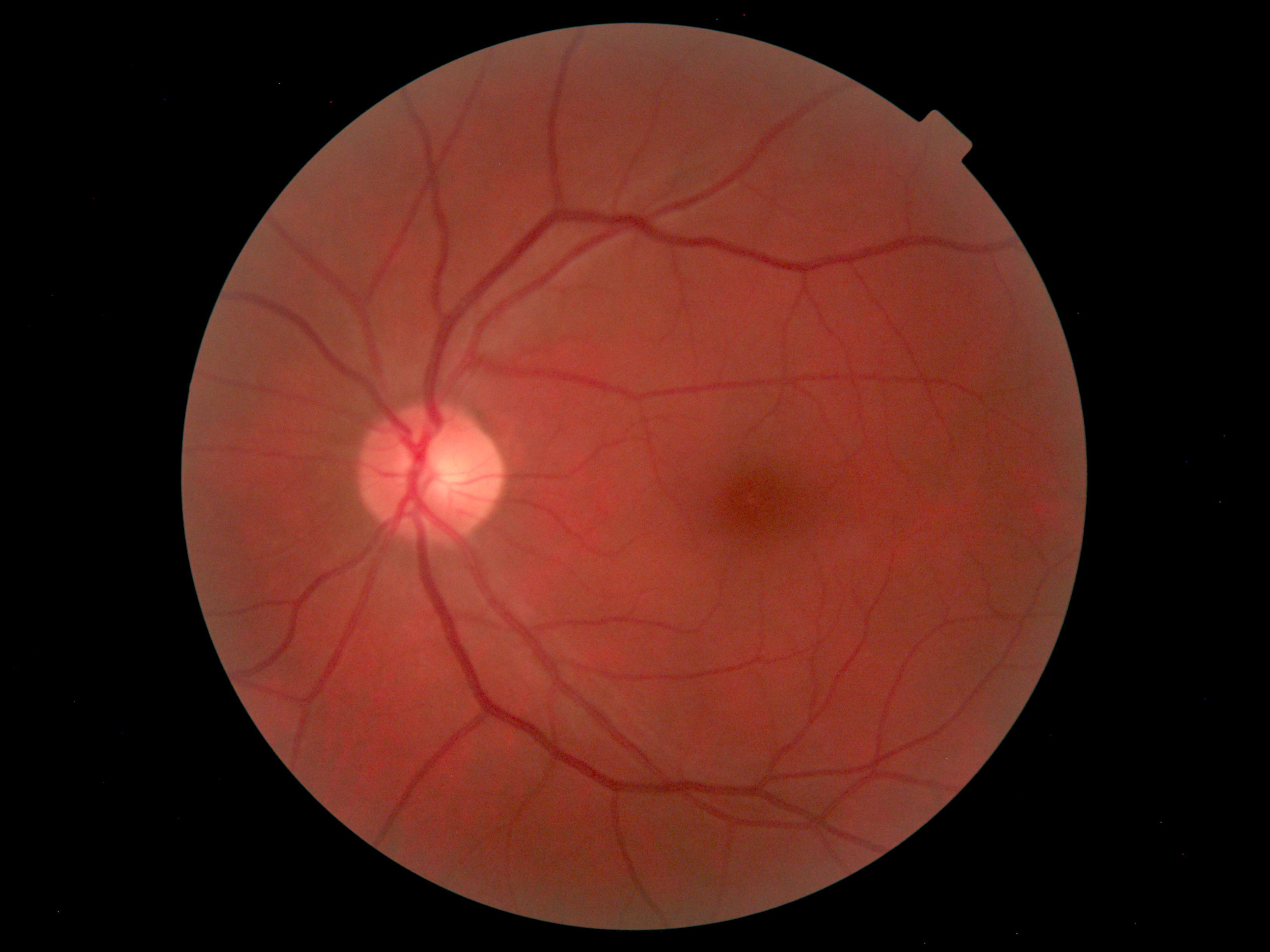 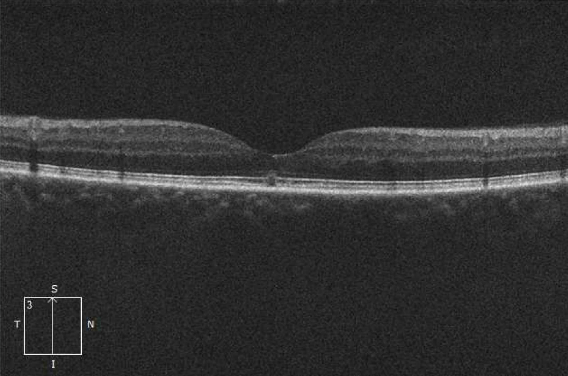 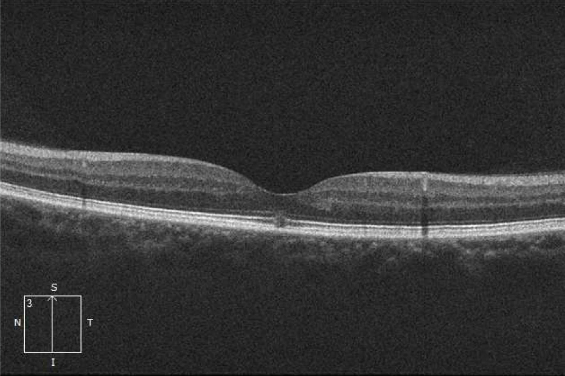 A common cause of bilateral central disruption of the ellipsoid zone is solar retinopathy. Damage to the retina by exposure to light presents as central scotomas caused by photochemical injury to the photoreceptors. Solar retinopathy is most often associated with gazing at the sun or a solar eclipse, but can also occur from exposure to laser light, welding arcs and ophthalmic light sources used during ocular surgery. Recovery often occurs spontaneously within 6 months of the initial injury but may be incomplete, resulting in permanent vision loss. The patient denied exposure to light, but the exposure may have been transient or unrecognized by the patient.

Cone dystrophy is another condition that presents with reduced central vision. There have been 12 different associated genes identified, and more than 30 different types of cone dystrophy that may be inherited as autosomal dominant, autosomal recessive or X-linked. Typically, symptoms of vision loss begin in childhood and worsen over time. The patient in this case was middle-aged and reported slightly improved central vision. For these reasons, additional testing was not obtained to further rule out cone dystrophy.

Macular telangiectasia type II presents with bilateral central outer retinal disruption. The cause of the condition is unclear but is suggested to have a genetic component and has recently been linked to altered metabolism of serine. Vision loss results from changes within the macular capillary network and neurosensory atrophy. Early findings may be subtle such as perifoveal retinal sheen and pigment changes temporal to the fovea. A characteristic OCT finding in macular telangiectasia is thickened internal limiting membrane with foveal cavitation and outer-retinal atrophy. Other findings, often developing later as the disease progresses, may include telangiectatic vessels, temporal pigment plaques, superficial crystalline deposits and development of choroidal neovascular membrane.

A much lesser known cause of bilateral central outer-retinal disruption and central scotoma is poppers maculopathy, a condition caused by inhalation of recreational drugs called poppers. After further questioning of the specific type of recreational drugs used by the patient, he admitted to use of poppers at the time of onset of vision loss.

Poppers are a group of inhaled recreational drugs that contain alkyl nitrates. These compounds are popular in the homosexual community to enhance sexual experience and for their mild psychoactive effects. Poppers originally came in small glass ampules that made a popping noise upon opening. They are regulated in the U.S. but can be found online or at sex shops.

The mechanism of retinal damage caused by poppers is unknown. Alkyl nitrates are volatile nitric oxide donors. Nitric oxide is a potent vasodilator, so some suggest that acute changes in ocular perfusion pressure results in retinal injury. Nitric oxide additionally acts as a neuromodulatory molecule for activation of guanylate cyclase, an enzyme involved in the recovery of photoreceptors after phototransduction. Due to similarities to solar retinopathy, others have hypothesized that the injury to the photoreceptors causes increased photosensitivity resulting in photochemical injury.

Partial or total improvement in vision and reversal of structural changes on OCT have been reported in poppers maculopathy, even in patients who reported chronic, long-term use of poppers. The patient in this case had already discontinued use of poppers at the time of examination. We advised the patient to avoid future use to eliminate the risk for further vision loss.

In a survey of 1,322 people who reported using poppers in the last 12 months, 159 patients (12%) reported visual symptoms. Of these patients, only 19 (11.9%) visited a health care professional regarding their symptoms, and only three of these patients mentioned the use of poppers to their provider (Davies et al.).

Patients are unlikely to report the use of poppers without specific or firm questioning for a variety of different reasons, including fear of admitting drug use and stigma related their use for sexual activity. Individuals using poppers often mistakenly believe that they are benign and disregard medical recommendations against their usage. Some individuals, specifically young adolescents, may be exposed to nitrates through the practice of huffing household chemicals.

This case demonstrates the importance of specifically asking patients with new onset central scotoma about the use of poppers and huffing solvents.

Rachel Obrock, OD, completed an optometric retinal fellowship with Scott C. Richards, MD. She now practices at Nappanee Family Eyecare in Nappanee, Ind. She can be reached at [email protected].

Scott C. Richards, MD, has practiced for 22 years in Ogden, Utah, and 8 years in Fort Wayne, Indiana. He can be reached at [email protected].

Receive an email when new articles are posted on

Please provide your email address to receive an email when new articles are posted on .
We were unable to process your request. Please try again later. If you continue to have this issue please contact [email protected].