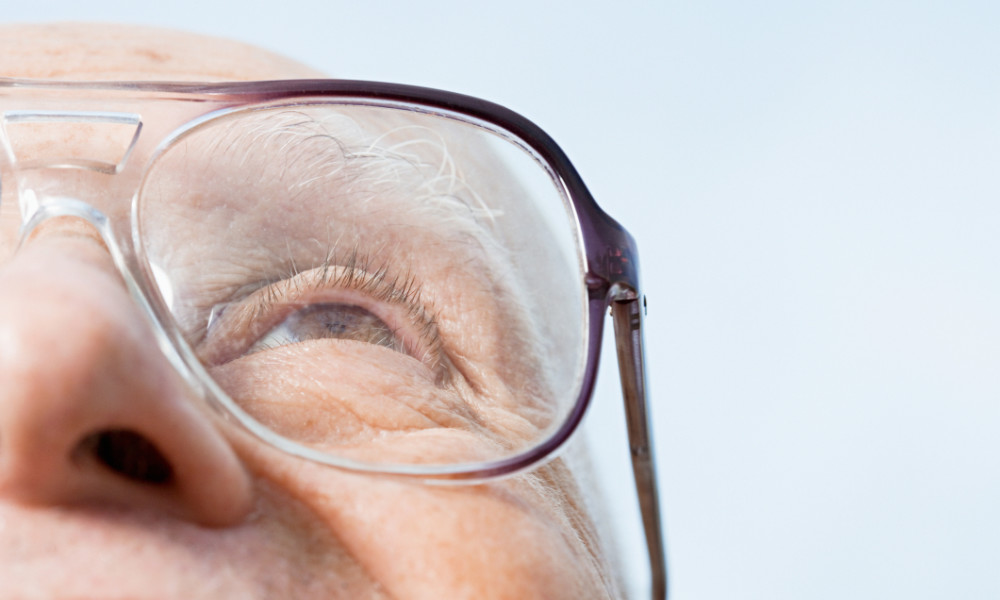 University of Rochester researchers have created the first 3D lab model that mimics the part of the human retina affected in macular degeneration, the most frequent cause of blindness in adults 50 years of age or older. (Getty Images photo)

Rochester researchers say their breakthrough could lead to patient-specific treatments.

Age-related macular degeneration (AMD), which leads to a loss of central vision, is the most frequent cause of blindness in adults 50 years of age or older, affecting an estimated 196 million people worldwide. There is no cure, though treatment can slow the onset and preserve some vision.

Recently, however, researchers at the University of Rochester have made an important breakthrough in the quest for an AMD cure. Their first three-dimensional (3D) lab model mimics the part of the human retina affected in macular degeneration.

Their model combines stem cell-derived retinal tissue and vascular networks from human patients with bioengineered synthetic materials in a three-dimensional “matrix.” Notably, using patient-derived 3D retinal tissue allowed the researchers to investigate the underlying mechanisms involved in advanced neovascular macular degeneration, the wet form of macular degeneration, which is the more debilitating and blinding form of the disease.

The researchers have also demonstrated that wet-AMD-related changes in their human retina model could be targeted with drugs.

“Once we have validated this over a large sample, the next hope would be to develop rational drug therapies and potentially even test the efficacy of a specific drug to work for individual patients,” says Ruchira Singh, an associate professor of ophthalmology at the University’s Flaum Eye Institute.

The lab of Danielle Benoit, professor of biomedical engineering and director of the Materials Science Program, engineered the synthetic materials for the matrix and helped configure it, as described in a paper in Cell Stem Cell.

Singh says the findings should help resolve a “huge” debate among researchers in the field who have been trying to determine whether:

Their research points strongly to retinal defects as being responsible—and in particular, to defects in an area called the retinal pigment epithelium (RPE), a pigmented cell layer that nourishes the retina’s photoreceptor cells. 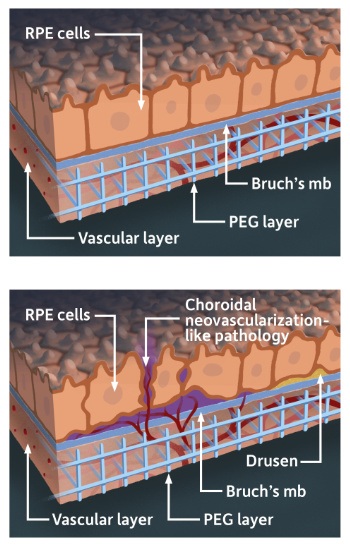 An illustration of the lab model that mimics the part of the human retina affected in macular degeneration. The model combines stem cell-derived retinal tissue and vascular networks from human patients with bioengineered synthetic materials in a 3D “matrix.” (University of Rochester illustration / Michael Osadciw)

Two areas of the human eye are affected by AMD. They include the RPE and, beneath the RPE, an underlying support system called the choriocapillaris, composed largely of capillaries that feed the outer retina.

Until now, researchers have relied largely on rodent models. But the anatomy and physiology of the human and rodent retinae are very different. According to Singh, it was essential to create “an in vitro human model of the choriocapillaris layer integrated with the RPE to get the entire complex that is affected by this disease.”

For example, in a previous study, Singh’s lab used only a single retina cell type—patient-derived retinal pigment epithelium (RPE)—to show that symptoms of early and dry forms of AMD could be mimicked in culture, and could be solely caused by dysfunction in the RPE cells. However, the role of the choriocapillaris layer had remained “a mystery that nobody has ever been able to model in culture,” she says.

That’s why it was so important to develop an in vitro and modular human model that could integrate a choriocapillaris layer with the RPE “to get the entire complex that is affected by this disease, so that properties of each individual cell type can be controlled independently,” Singh says.

And that’s why Benoit’s lab, which specializes in creating synthetic hydrogels for cell culture, tissue engineering, and target drug delivery, was important.

Benoit’s lab engineered the 3D matrix in which the choriocapillaris could be safely placed and also “properly oriented in the overall vasculature,” Benoit says. “We also facilitated the adhesion of the RPE cells within the model. It was a small, but important contribution. A three-dimensional model was essential to describe the really amazing things that have been identified and discovered using this model.”

The findings offer a possible resolution to the debate over the causes of macular degeneration. The researchers now show for the first time that defects in RPE cells alone are sufficient to cause the disease. “You can have completely normal choriocapillaris, but if your RPE’s are dysfunctional it will cause the choriocapillaris to dysfunction,” Singh says.

Similarly, using blood samples from patients with wet AMD in the human retina model, their data for the first time also shows that blood-derived factors from patients can independently contribute to the development and progression of wet AMD.

The collaborations, Singh says, have succeeded in

The latest research by Singh and Benoit builds on the University of Rochester’s long tradition as a world leader in vision science.

In the 1990s, for example, David Williams, the William G. Allyn Professor of Medical Optics, and his group applied adaptive optics—first used in telescopes to more clearly see through the Earth’s atmosphere—to image individual retinal cells, right down to single photoreceptors in the living human retina. The work of Williams and his team has had a far-reaching effect on procedures to improve vision and is applied throughout the world in Lasik procedures today.

That legacy attracted both Singh and Benoit to Rochester, but so, too, did another factor: the proximity of the engineering and science departments and the Medical Center—located across an avenue from one another—and the chance to work together. Benoit says that proximity was a “critical” factor in her decision to join the Department of Biomedical Engineering in 2010. Singh says the opportunity to collaborate with Benoit was one of the main reasons she decided to join the Medical Center seven years ago.

It’s useful in forging other collaborations as well. Vision science at the University now involves a synergy of science, engineering and medicine across various departments including brain and cognitive sciences, neurobiology and anatomy, and ophthalmology, engaging about 100 Rochester faculty members. The Center for Visual Science, and its ARIA lab, directed by Williams, collaborates closely with the Medical Center’s Flaum Eye Institute and is the hub of these collaborations.

Other collaborators on the paper include: